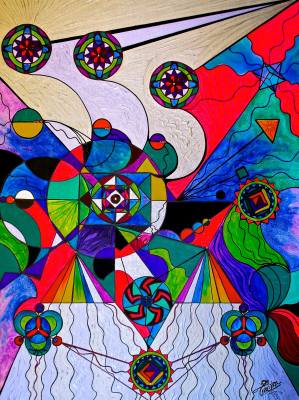 An Arcturian Light Grid that represents the path of progression to Aether as well as acts in and of itself as a doorway to Aether.  It can be activated much like a portal can be activated.  Aether is the spiritual material that permeates through time and space.  It is also referred to as Quintessence or the Fifth Element.  In order to access Aether, which is celestial in nature, one’s consciousness must transcend the terrestrial aspect of the universe.  With that level of consciousness a being has access to divine purity as well as omniscience and so, they become the embodiment of truth and the embodiment of light.  This vibration is so powerful in terms of its capacity to teach people to exit terrestrial limitations that it is not recommended for anyone who is practicing grounding or fully embodied tasks.

Like Teal Swan's paintings and "Let The Universe Choose Your Message"? You might like Teal's Frequency guidance deck!
The deck contains 77 frequency cards, and a booklet with descriptions of each card meaning as well as some reading spreads you can use the cards for.